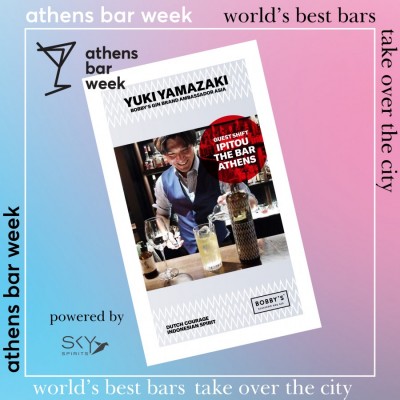 Yuki Yamazaki was studying music in London in 2003 when he decided to
become a bartender. “I used to wander around the bars looking for venues to
play music,” he reminisces. “I ended up joining a few jam sessions in cocktail
bars where I started to take an interest in what the bartenders were doing. So,
I decided that that’s the career for me and I went to work in a sushi bar making
sake cocktails.” He then went back to Tokyo thinking that to learn the art of
mixology properly, he should learn it in Japan so he joined the Park Hotel Tokyo
where he learnt the Japanese style of bartending. Time passed and seven
years later he was invited to Whisky Live in Toronto, Ontario to take part in a
whisky competition. As fate would have it – he won. He quickly became a well-
known celebrity – it was the first time the Canadians had seen anyone carve
ice balls.

In 2011 during the Great East Japan Earthquake, the Japanese Embassy in Toronto invited Yuki to create cocktails made with Japanese ingredients for a charity event. All the guests loved the
flavours he introduced into his cocktails and the event was duly reported in the local media. This publicity prompted him to create his own Japanese bitters. “In the beginning, it was just a hobby,” he says, “I did not think about selling or ex-porting my creations. That is until people started asking where they could buy my bitters. So I quickly applied for an alcohol licence to manufacture my own.