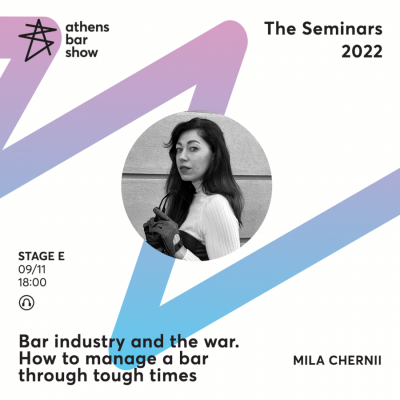 Bar industry and the war. How to manage a bar through tough times

Mila Chernii is co-owner of Ukrainian cocktail bar «POLUNOCHNYKY» (Nighthawks), which was named after Edward Hopper famous painting with the same name. The idea of the cocktail bar was created in the town not far from Kyiv, improved with the help of the best Ukrainian and foreign bartenders and finalized on famous Barometer Show in Kyiv.

Bar is turning 1 year old these days, but it already had good friends in best world bars, as well as the list of pop-ups which were hold there during last year.

Severe Ukrainian realities put many limitations on the bar plans and ambitions. Still Mila will share incredible experience how to run and develop bar in the tough times, how Ukrainian bar culture changed from the beginning of war, and how Ukrainian bars still manage to be in 50 Best Discovery.

Mila will share exclusive facts about drinking culture in the country under the war, and will show how Ukrainian bartenders lived in the bars during first weeks of occupation, continuing making senses and developing industry.