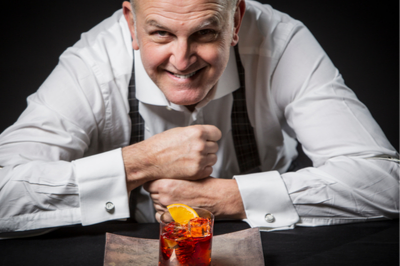 Luca Picchi was born in 1961 in Florence, Italy. Following his high-school years, Picchi made his way to Pisa to go to Veterinary college; there he studied biology, botanicals and chemistry, discovering and developing his keen interest and knowledge in the balance and harmony existing between natural ingredients. Learning the ropes from the ground up, he soon started a career in line with his true calling, as a barback, cleaning glasses, which developed into a 20 year stint working his way through the ranks to work behind the bar where Luca first developed his passion for cocktails, beginning his formal education to learn the art of mixology in 1993 at a bartending course.
In 1997, Luca Picchi opened his own cocktail bar and restaurant, before becoming head bartender at Caffè Rivoire in Florence, where he worked for 20 years. Here, Luca started showing increasing interest in the origin and history of the Negroni, writing his first book in 2008, documenting the life of Count Camillo Negroni titled ‘Sulle Tracce del Conte: La Vera Storia del Cocktail Negroni’ (On the Trail of the Count, The True Story of the Negroni Cocktail).
Luca Picchi is now chief barman at Caffè Gilli in Florence, and is said to “know more about the Negroni’s history than anyone else” according to Alice Lascelles in her 2015 List Of Ten Cocktails for The Financial Times. In 2015, Luca Picchi published a second book dedicated to the Negroni titled: ‘Negroni Cocktail. An Italian Legend’ which propelled his career and further cemented his role as a Negroni expert.
Today, Luca continues to share his passion for Negroni cocktails, teaching masterclasses to blossoming bartenders, whilst continuously sharing the story of this historic drink, playing an important role in Campari N100, the global celebrate of the centenary of the cocktail.