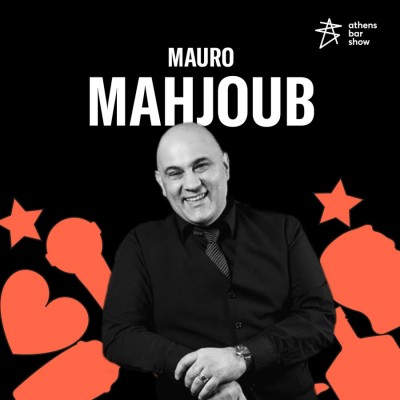 Mauro Mahjoub celebrates his 30 years behind the bar. Mauro is gifted in language, and speaks five of them: Italian, English, French, German and Arabic. (little bit of Spanish).

in 1998 he decided to open his own bar "Negroni". The same year Mahjoub created the "Category Negroni".

In 2009 he established the "Mauro's Negroni Club", an American bar, in The last year he changes the name of the bar in Boulevardier with the same Philosophy… in name of professionality.

Mauro Mahjoub is a winner of numerous National and International Competitions, in 2002 was awarded in Bavaria as "Bartender of the Year".The same year he obtained a Diploma of the Hotel School of Munich as a “Barmeister”. For Mauro the Bar is not just a job, but rather a passion that led him to become a historian of the Bar, Consultant, Internationally renowned for his skills as a Master and as Mixologist. He begins to conceive and keep Master Classes around the world. (more as 30 Countries)), The main themes of his seminars are the History of the bar, Negroni, Americano, Hospitality, Aperitivo Italiano, Bitter Campari, Dry Martini, Tiki Cocktails, Prohibition, Vintage drinks, Vintage Bar books, Bar Tools, Famous Bartender, etc.), the art of preparing fine cocktails, the organization and management of the bar, Consulting, staff training and customer service.

In 2008 he became brand ambassador for Campari and founded the Academy of Munich, where he gives seminars and leads many Tastings.

He founded the first museum of Cocktail in Europe (in the Academy); founder and coordinator of the Competition Campari "Liquid Art" in Germany.

Mahjoub is a member of various associations of Bartender (DBU, ÖBU, AMBA, AIBES, IBA), and holds seminars for the IBA; EDC Training Centre in Tallinn, Italy, and the World Championship in Sofia, 2015) and AIBES, where he is a honorary member since 2010. Mauro Mahjoub is also examiner and President/judge of many competitions around the world, including IBA and AIBES.

Mauro he exhibited bar books and tools in the Museum town of Cognac in France in 2009, and every year at the "Trophée du Bar" (Paris), Berlin and Munich and Italy.

Why King of Negroni?

In the thirty years of his career Mauro has realized almost one Million Negroni (included the Twists).

In 1998 he opened in Munich the first Negroni Bar in the world (with a partner).

At the beginning of the new Millennium after a long search he was the first in the world to do Master's Degrees in all parts of the Globe on the Negroni topic.

2011 participated with eight other Italian bartenders to make the world's largest Negroni in the World in New Orleans.

He invented more than 100 Negroni Twist.