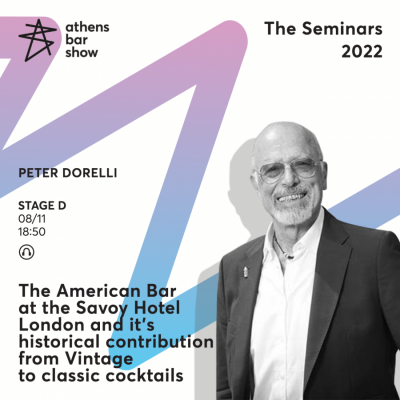 was born in Rome, Italy in 1940 and came to England when I was 18.  I worked in hotels around the country and eventually in 1963 joined the Savoy Group at Stones Chop House in London as Head Barman of the Pebble Bar where I stayed until 1981.  When the Company sold the restaurant I moved to the American Bar of the Savoy Hotel itself as Assistant Head Barman, becoming Head Barman/Bar Manager in 1984 and remaining until I retired in 2003 at the age of 63.

I have been a member of the United Kingdom Bartenders Guild for 50 years and was President from 1997-2004 . After that I became Education Secretary and was involved with running their training courses.   I am currently National/International Ambassador for the Guild and am delighted to see the enthusiasm and energy of today’s young bartenders around the world. I am keen to ensure that they are given every opportunity not only to succeed but also to enjoy working in the cocktail world.

I have won several cocktail competitions in the past, including the MSS Europa Cocktail 1994 which I won with my “Elise” cocktail, named after my daughter. Awards I have received include one for “Outstanding Contribution” at the Bar Awards 2003 (in Association with Class Magazine), an award for “Industry Personality” at the Flavour Bar Awards 2004, as well as a Helen David Life time Achievement Award in 2009 from Tales of the Cocktail, New Orleans. More recently, in 2021, I received a “Lifetime Achievement” Award from Rolling Pin, Austria.

Over the years I have given many cocktail demonstrations and specially designed cocktails for numerous film and book launches, Royal and other national occasions.  I have organised cocktail competitions, plus acted as judge on many occasions. This includes for a number of years having been chairman of judges at the Bacardi Legacy Competition, and acting as one of the original global/international judges for the World Class Competition with Diageo.  I continue to be involved with Tales of the Cocktail on the panel for Selecting future Helen David Award recipients.

I  have also contributed to numerous magazines, newspapers and books and television as well as finding time for some consultancy work, special event work and masterclasses. Some examples include involvement with the Elton John Foundation  on their first annual Character Cocktail event, promoting UK Channel 4 television Christmas programmes and more recently in 2017 creating a cocktail for the 30th anniversary of London  City Airport (the East End Flyer).

I have most recently presented during the World 50 Best Bars event in Barcelona, attended The Berlin zbar Convent and presented at BRIFT in Romania.

Next year In 2023, all being well, I will celebrate my 60th year in our industry and now  in my 80s I am delighted to be able to continue educating and contributing within the bartending world.