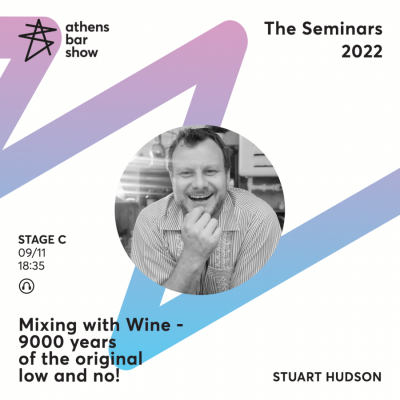 Stuart Hudson is a 25-year veteran of the drinks industry, spending the last 18 years based in London. Widely recognized by both peers and venue operators alike, due to his unique skill set which encompasses all areas of the beverage industry. Stuart is not only, has an accredited knowledge of both spirits, beers, and cocktails, he is also a qualified wine and sake sommelier.

During his time in London Stuart worked in and ran some of the city’s leading and most awarded venues. These include Milk & Honey as Head Bartender, Sake No Hana as Head Sommelier, Viajante as Beverage Manager and Hawksmoor as Group Wine Buyer.

After this time Stuart founded his own consultancy company Forgotten Hospitality, now in its tenth year, he has worked with and on, many leading bars and international brands, including Monkey Shoulder Whisky, Moet & Chandon, Trailer Happiness and Tabasco to name a few.

Stuart is well noted for his training in the drinks industry. Having placed a large emphasis on training throughout his career, not only of himself, but also for others within in the drinks industry, and as such he has presented at numerous bar shows and drinks events all around the world, alongside hosting a numerous educational trips for industry professionals.

Most recently Stuart his wine cocktail bar concept Bar Liber, with the aim of making wine fun again. After enjoying a successful and well received yearlong residency in central London, Stuart is now taking the concept on tour around the Uk and the world, staging several talks and bar takeovers while they finalise a permanent home.