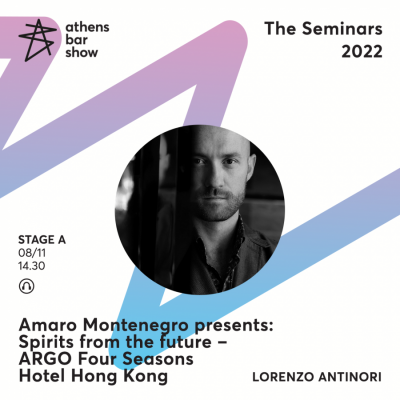 After experiences in Australia and Mexico, in 2011, Lorenzo moved to London, where he joint the American Bar at the Savoy Hotel, and after 2 years the Beaufort Bar at the Savoy Hotel, both awarded as Best International Hotel Bar. In late 2015, Lorenzo joined Dandelyan (#2 by the World’s 50 Best Bars, in 2016) at Mondrian Hotel, under the role of Head bartender, running the daily base operations of the bar.

In February 2017 joined Four Seasons Hotel & Resorts in Seoul as Head of Bars, with a special focus in Charles H., the destination bar within the property. During his tenancy at Charles H. has been ranked #14 in Asia 50 Best Bars and #64 in World’s Best Bars 2018.

On February 2019, Lorenzo was appointed Beverage Ambassador for Four Seasons Hotel and Resorts APAC and Beverage Manager at Four Seasons Hotel Hong Kong, with a major focus on Caprice Bar, nominated #34 and #10 (Highest Climber) at Asia 50 Best Bars 2020 and 2021 and #1 Time Out HK’s Best Bars.